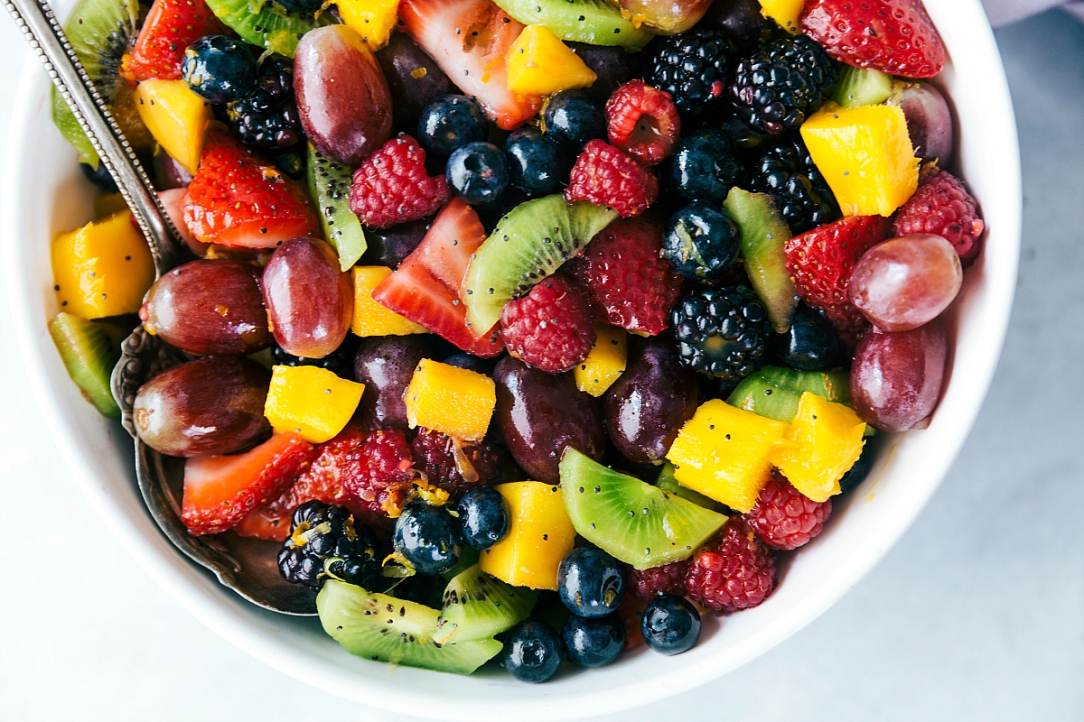 The Juice Challenge: How I Managed To Appreciate 10 Days Without Solid Food

On October 1st I decided to commit to a 10 Day Juice Challenge. The idea was presented to me by my mother as she was introduced to the challenge by a friend/sister named, Claudia G. Barnett, Ph. D. Dr. Barnett wrote a book entitled, My Decision To Go Vegan: A Mentored Journey, where she discussed why she decided to consider juicing and how it led her to become a vegan. 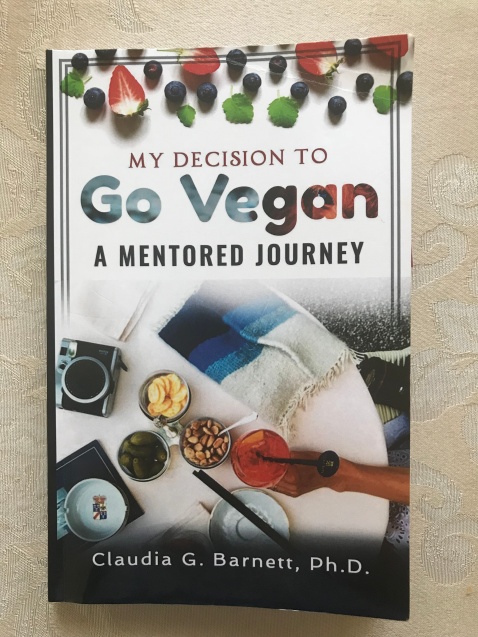 When my mom told me about Dr. Barnett and how much her life changed after deciding to juice for 10 days. I knew I had no other choice, but to give it a shot. In the book, Dr. Barnett explained that her health is what made her consider juicing. She was tired of her repetitive morning routine, where getting out of bed seemed so much harder than picking up something to eat.

I honestly felt the same way, which is why I made sure I tried to remain active this summer. I ran two races, which was something I have never done before, but always wanted to do. Since it was my first time running a 5K race, my best friend Rosa made sure I was fully equipped to complete both races, so we both stayed in the gym and monitored what we ate. To top it all off, I ran my second race, which was the Adidas Run For The Oceans race faster than the time I completed my first race. I was so proud of myself and used that achievement as an example of how hard I am capable of working and how good my body started to feel.

Despite those accomplishments, I still ended up getting lazy again. Once summer ended I began to miss more days at the gym, but I wasn’t missing any meals. I became too comfortable with eating Chic Fil A once a week and heading out to restaurants with my boyfriend. This is exactly why I decided to do the juice challenge. I wasn’t apprehensive nor did I doubt myself that I wouldn’t be able to commit to 10 solid days of not being able to eat my favorite foods. I ignored all of that because I was sick and tired of feeling bloated and having my clothes starting to fit me tight.

What I did to remain focused?

Now I won’t sell anyone a dream, this challenge was definitely hard. I handled the first two days like a champ. I didn’t eat anything and drank four bottles of juice that I prepared the night before and I also drank at least two to three fifty ounce bottles of water a day to keep me full. Whenever I had the slightest thought of food, I found a new way to distract myself. I read books, looked through magazines, did research on juice cleanses and came up with new exercises to do at the gym. I never realized how much your mind could convince you that you need to eat something. So the idea of mind over matter definitely worked in this situation.

However, the third day, as well as the fourth, was extremely hard. I won’t lie I was so close to pulling up to Chic Fil A and having a spicy chicken deluxe sandwich with french fries and a lemonade (my favorite). I would have eaten anything, Chic Fil A wasn’t even that important to me. I just wanted to be chewing on something, which would’ve given me the satisfaction I wanted at the moment, but I didn’t eat anything. I kept telling myself you know how bad you want to slim down and I continued thinking about how great I was going to feel once I completed this challenge.

As the week progressed, I will be honest I slipped up and ate Chinese food. To me, it wasn’t that bad because I didn’t eat anything too heavy. All I had was shrimp and broccoli, but that was on the fifth day of the cleanse. This slip up is exactly why I decided to throw two extra days onto the cleanse.

Once Saturday and Sunday rolled around, I felt amazing! My hair seemed a little longer and fuller and my body felt extremely light. I also noticed that my tops were starting to fit me so much better. I wore a top on Sunday, which was the seventh day, two weeks prior to the cleanse. Two weeks ago the top was so tight across my chest and on my arms, but on Sunday it fit perfectly and was a lot looser.

Once I started to feel lighter and my skin starting glowing, I started to become obsessed with juicing. I looked forward to trying a new one each day and as I went along I started to come up with some creative names for them as seen in the pictures in the below. 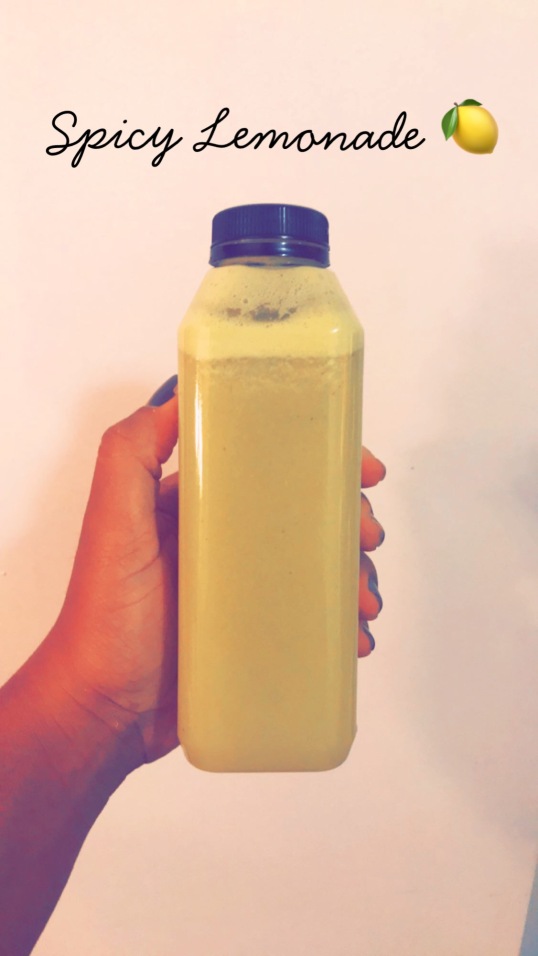 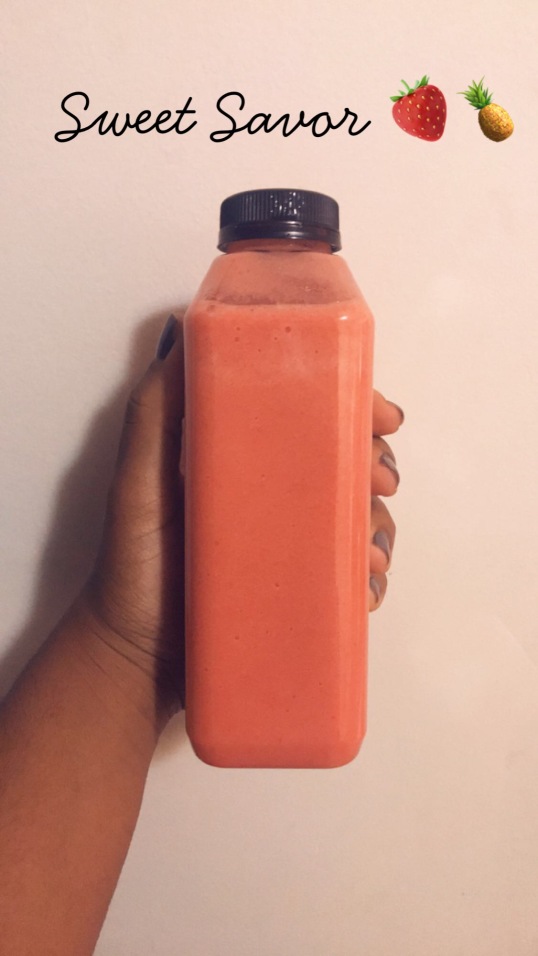 I also learned what my favorites were, which made the rest of the days left in the cleanse so much easier. I looked forward to starting my day with one of my favorite juices and although people were telling me I looked like I was slimming down, I didn’t see it. But once I actually looked at myself in the mirror and weighed myself I got so excited. I am honestly not sure if I lost weight from this cleanse because I didn’t weigh myself prior, but that’s only because I didn’t do this to drop pounds. I did this because I wanted to use this as an opportunity to get me back in the gym and to cut down on my obsession with eating out.

Would I recommend juicing?

I would definitely recommend that everyone try juicing. My body really needed to get rid of all of the bad toxins, especially since I was eating out so much and eating in such large portions. Juicing really reduced the bloated feeling I always felt I had. I also feel like drinking different fruits and vegetables along with so much water made me sweat so much more during my workouts. Whether it was in the gym or at home.

I have also noticed a drastic change in my skin. My skin complexion looks so much brighter and any dark marks that I might have had are completely gone. If you want to completely clean out your system I suggest you try juicing. Ten days might seem hard to commit to, but if you really think about it a week goes by in the blink of an eye. Nothing in life comes easy and if you really want something you have to work extremely hard for it. The juice challenge taught me that the mind has some serious control. You could easily convince yourself that you need something if you focus on it too much.

Throughout the process, I kept reminding myself that there are people in the world that are unable to eat. I was still able to put food in my stomach, only this time it was with the proper nutrients it needed. I thank Dr. Claudia Barnett so much for her words of encouragement in her book and for being so strong and willing to create a change in her life. She is truly an inspiration and living proof that small changes can lead to huge improvements. For more information on Dr. Barnett, visit her website cgbacssociates.com and follow her Facebook page, My Decision to GO VEGAN.”

If you try the 10 Day Juice Challenge, please hashtag #10DayJuiceChallenge on social media and tag me, all of my social media handles are @sostylash. I would love to hear why you decided to commit to the challenge and how it has impacted your life. Let’s keep this going and create a movement! All of the juice recipes I tried during this challenge will be on my site following this post.

5 comments on “The Juice Challenge: How I Managed To Appreciate 10 Days Without Solid Food”